One block at a time: Alumni recreate UT Tyler on Minecraft

Sitting in his computer chair wearing a UT Tyler polo against a Zoom background of Riter Tower, joking about how he and his project lead don’t have a life, it’s clear that Matthew Johnson is committed to this project.

“I just woke up one day and said, ‘I want to build The University of Texas at Tyler inside Minecraft, and why not?’” Johnson said.

“So, I go to Austin in the very beginning of this,” Johnson said. “He’s like my co-lead. We have another dude — we have about five people, but not everyone could be on, and we understand that,” Johnson said.

Johnson and Austin Irwin are recent graduates of UT Tyler. They both graduated in Dec. 2019 from the Soules College of Business with degrees in business management and accounting, respectively.

Johnson, who started the project’s Instagram (@utt.minecraft.dev), works for Texas Recovery Systems, an Irving-based telecommunications and electronics recycling firm for clients, as he explains, such as Verizon and AT&T. Irwin now works for a bank in Shreveport.

The two have an undeniable friendship, with great chemistry and hilarious banter. In one interaction, Johnson joked about not having a life outside of this, and Irwin agreed. The two went back and forth for more than a moment about who is more of a nerd or a loser and who spends more time on the project. In another, Johnson explained how deep the campus lakes were.

“Have you swam in them?” Irwin asked Johnson. “I’ve swam in them. They’re about eight feet.”

“I had a seven-foot fishing pole, and I put it all the way to the bottom one time,” Johnson said.

Irwin also said he's the technical side of the two. He explained that Johnson finds what he wants to do in Minecraft, and Irwin finds out how to do it.

Minecraft is a video game developed by Mojang Studios in which a player is dropped into an open, randomly-generated, cubic world of varying biomes. The biomes range from tropical rainforests to grassy plains, and from expansive deserts to wide tundras. Depending on your game mode, Creative or Survival, you can build to your liking, fly and control the time settings or harvest raw materials, cook food and fight off explosive underground zombies, called Creepers, respectively.

“We have WorldEdit, so you have to know certain commands, and you have to see things before you build them out, so I’m kinda technical, and [Johnson] directs everything,” Irwin said.

WorldEdit is a 2011 plugin (a small in-game addition) to Minecraft that, as Irwin explains, essentially acts as a copy and paste. In the game, you have two basic world types that help determine biomes: Default and Superflat.

“The world we started with was completely flat, so we had to build up,” Johnson said. “If you know at the top of the Alumni House, the ground slopes all the way down [across campus], and I didn’t know that until I started building, and I was like, ‘Oh, crap.’ Sorry, this is really technical, but in Minecraft, in a flat world, you dig down eight blocks, and you fall out of that world. Obviously, we need more than eight blocks to slope the whole University, so we had to build up massively, and that’s a lot of stuff that people don’t know about that goes into this. I think right now we’ve put … [according to timeplate] 3.76 days for the whole project.”

Johnson explained that his goal for the whole project was six months, with three to four being dedicated to constructing the exterior of the buildings on campus — the whole 259-acre campus — and two months dedicated to finalizing the interiors.

“We’ve actually ran into several roadblocks,” Johnson said. “When you go to try to type in pictures of a certain thing, say the Alumni House, on Google, because that’s how we first started, you don’t get anything from the pictures. You can go look up pictures of the Alumni House on Google, and you get pictures of the Alumni House under construction. So we actually got very lucky because — we don’t live near campus, we don’t live in Tyler, [and Austin] lives in a different state, but — online on the UT Tyler website, they have blueprints and floor plans of different rooms you can reserve, so we built the Alumni House to scale using those blueprints. Now, these other blueprints for the UC, HPC, BEP, HPR and the HPE, that stuff, we’re going to have to go through the archives to get.”

The construction plans for this project, the two explain, come from a patchwork of public records.

“Pictures are really hard to come by,” Johnson said. “We actually built the [Patriot Plaza] not knowing what it looked like … they only built that after we graduated. There are 2, maybe 3, drone shots [of the Plaza], and one of them is really blurry. Some stuff on Google Earth isn’t even up to date, like it’s from 2013. Like the Alumni House isn’t even finished [on Google Earth]. This is going way out there, super creepy — I had to get aerial views to see where chimneys and roof peaks were, because we weren’t actually on campus at the time, from the Snapchat Map. The Soules College of Business isn’t on either one.”

So far, according to Irwin, they have completed the entire Alumni House, the outside of the UC (including the MET), the Patriot Plaza, the bridge connecting the UC to the Stewart Administration Building, BEP, HPR, the initial outline of the nursing building and a complete Riter Tower. 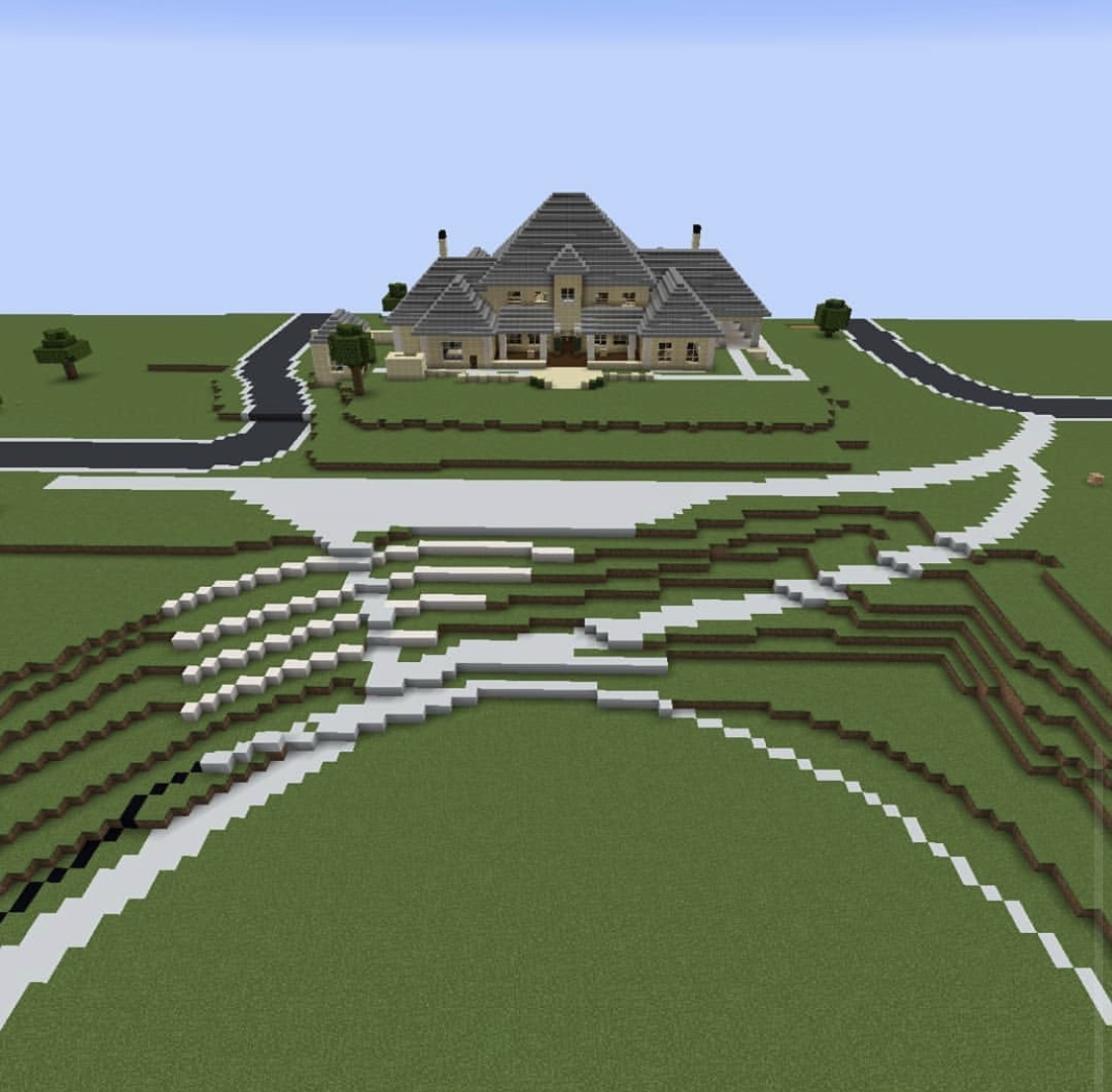 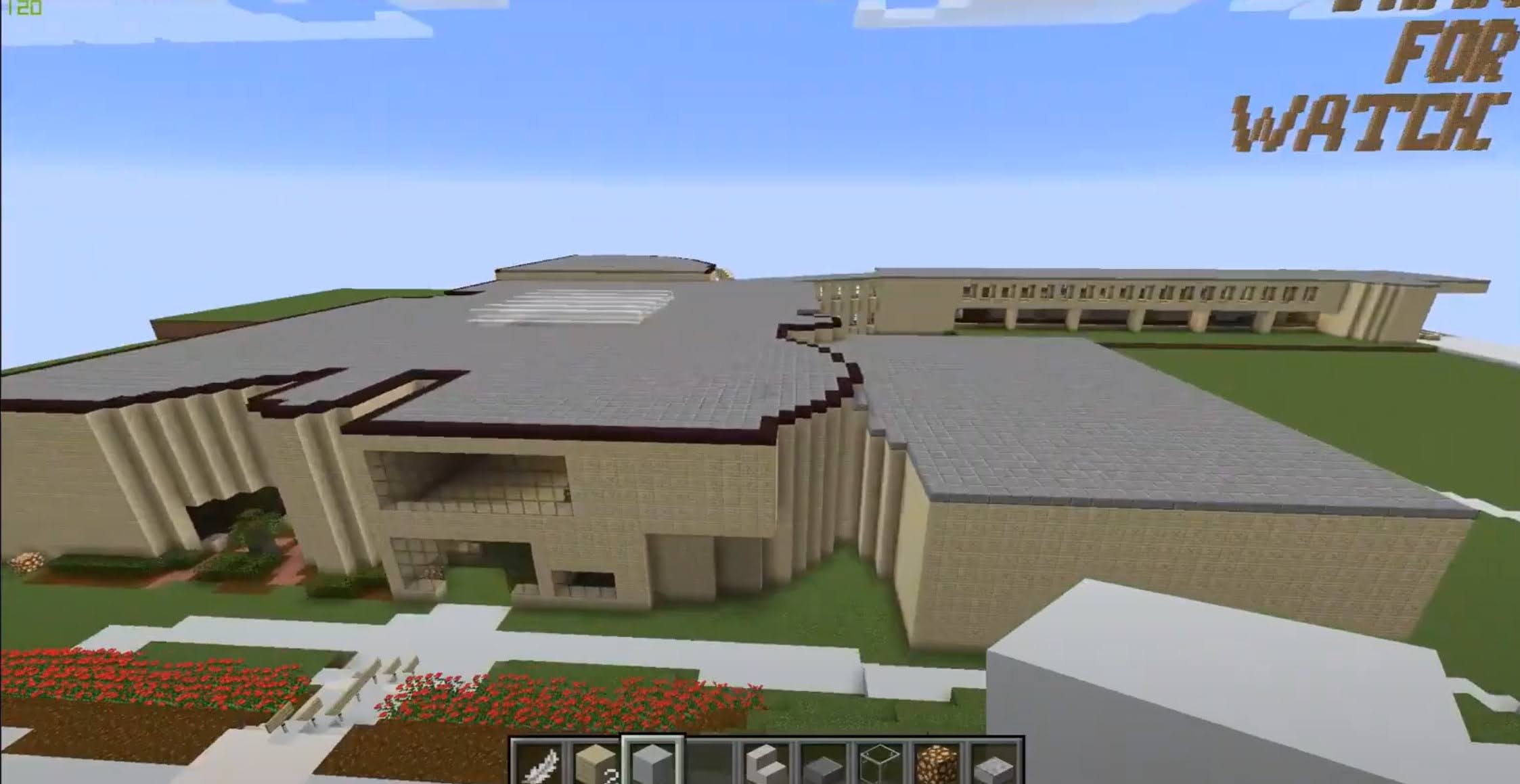 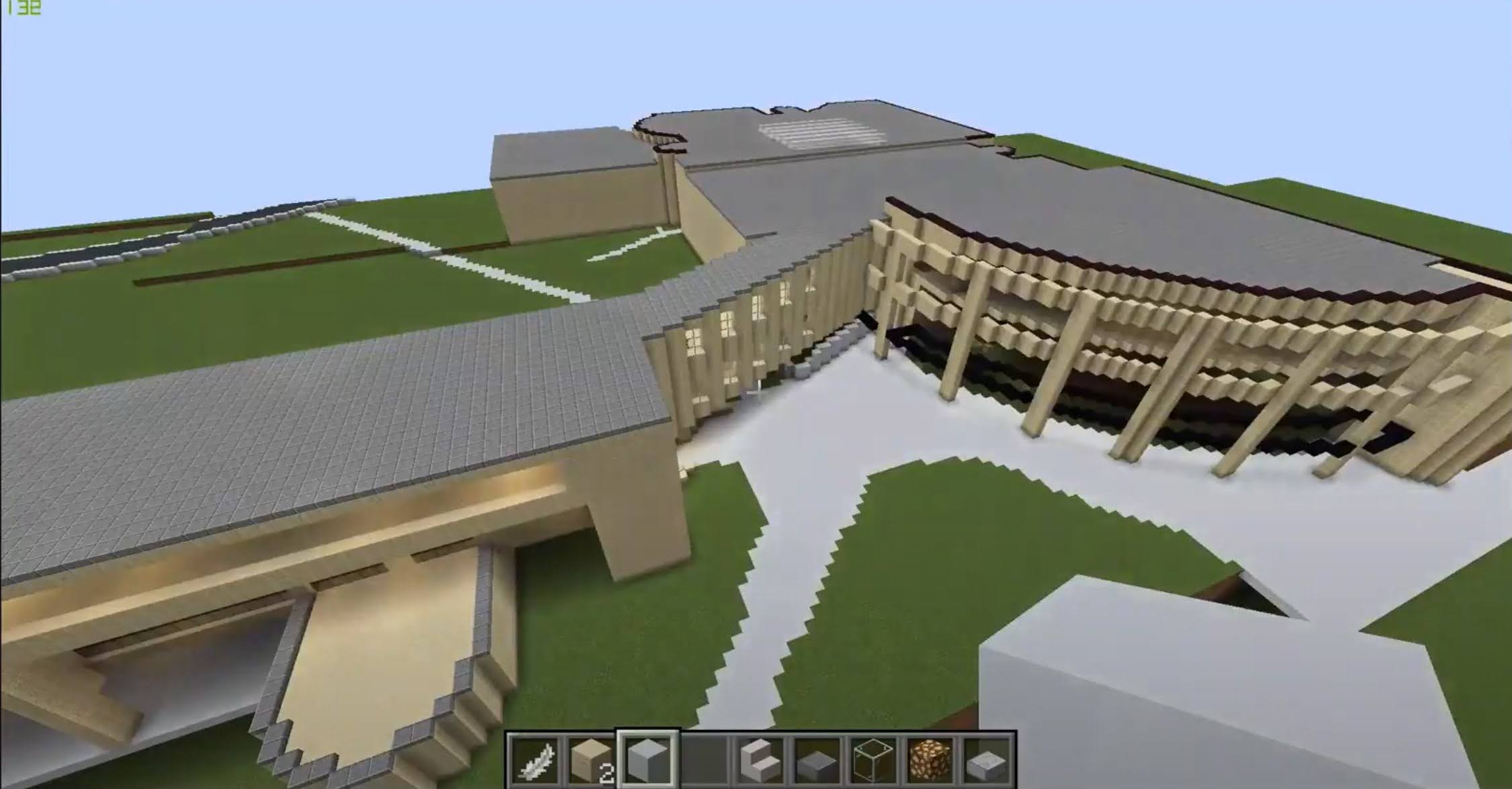 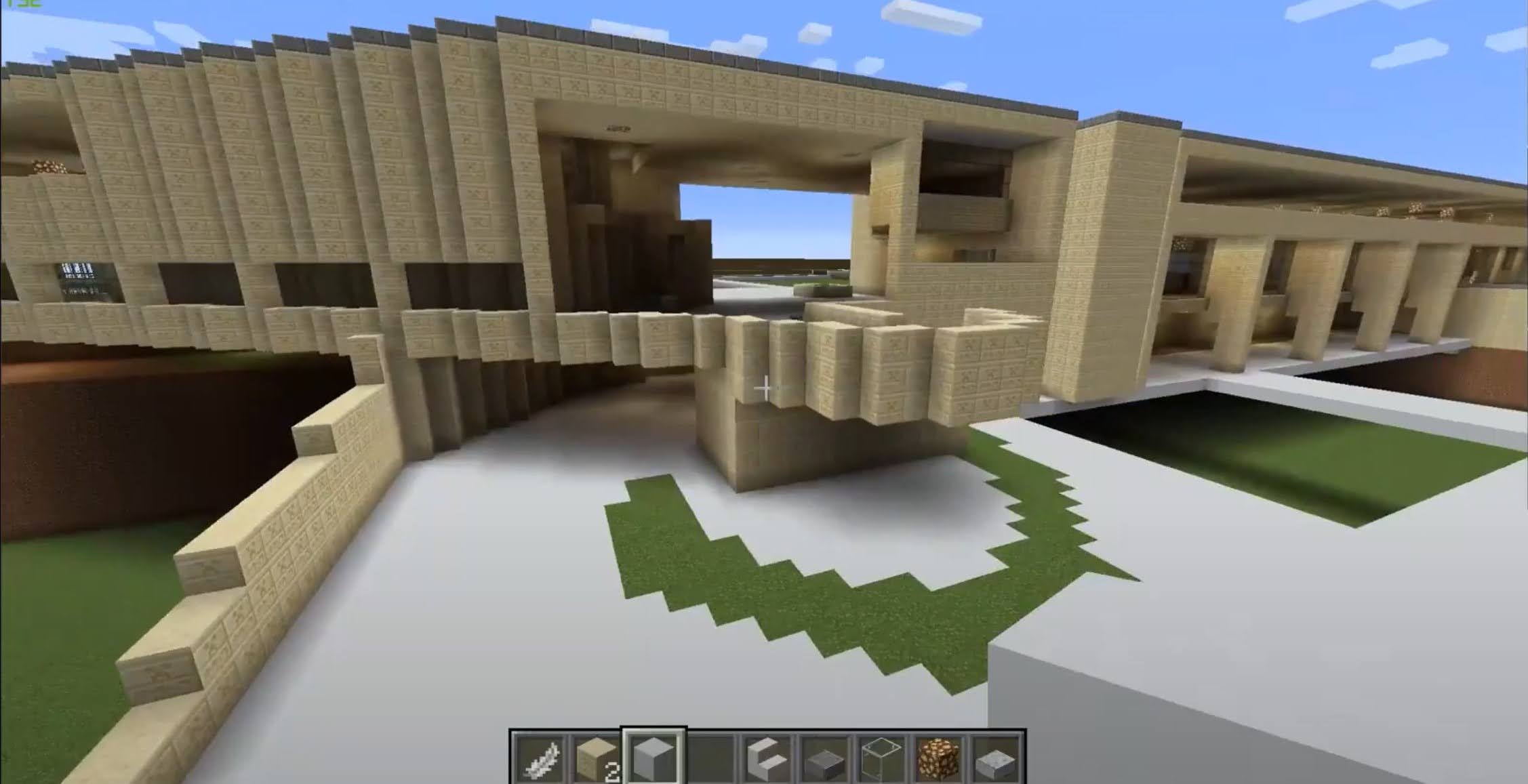 Still to come, they said, are the inside of those buildings, the Ratliff buildings, the Cowan, O-Hall, the pharmacy building, the library, CAS, Soules, the FAC, Facilities, the HPC, the HPE and the lakes.

“I always envisioned keeping this kind of private, and then at some point I was like, ‘I’m building this to share with people who go to the University, the staff and people who might be looking to go to the University in the future,” Johnson said. “At one point, we decided we needed to share this, and that’s when we created the social media. We’re not doing it for likes. Sure, we want likes, likes are amazing, but we’re not gonna get monetized off of this.”

Johnson and Irwin are inviting students to get involved by following their Instagram or emailing them for more information at uttylerr.minecraft.dev@gmail.com (and yes, it’s spelled wrong).

While there has been no official decision on building the rest of the on-campus housing, with a group of friends, a personal Minecraft server and a timeline designed six months out, why not take it one block at a time?

Pumpkin spice and everything nice

Who's on the ballot?: UT Tyler area candidates